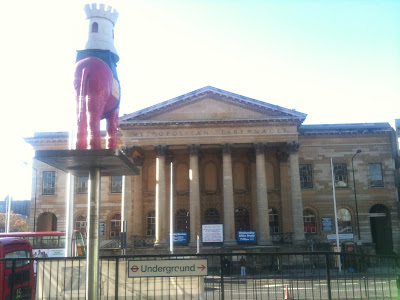 Our friend Rebecca Davies, who graduated with Maria and Chris at the RCA in July, had asked us in the summer to be part of her week-long residency at The Elephant and Castle Shopping Centre in London which had finally come around.

Rebecca has studied the area for over two years as part of her graduating work which documented the region through illustrated and documentary work and set up in the shopping centre in an empty unit, a space to facilitate and exhibit the work of artists concerned with the regeneration of its community - the blog for which is here. 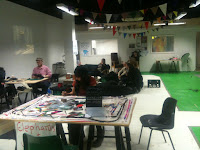 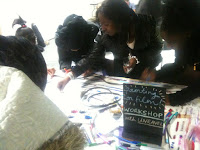 Asides from our two workshops there were screenings of new work by Altermodern exhibitor Marcus Coates, and Blight by one of Chris's favorite film makers John Smith. If you've never heard of John Smith then you are really missing out on his humorous and enetertaining but pointedly sophisticated films that engage the viewer through conventional documentary or narrative formats but subvert them into deeply sophisticated  investigations into the nature of the relationship between the viewer and the viewed. One of his most celebrated works The Girl Chewing Gum is viewable as an extract here but is also available on the Cinema 16 DVD and an anthology of his work is soon to be released on DVD by LUX.
The people who dropped by and took part in our workshops were full of character, warm and friendly with a great deal of appreciation for what Rebecca had took it on herself to do. It certainly validated Rebecca's work as a study of a community and its inhabitants and has perhaps encouraged her to delve even further into the Elephant.
Big congrats Becca - this was a big success.
Posted by Unravel -The longest hand painted film in Britain at 14:49