Some brand new dates just confirmed - we can't help but smile that we will be taking Unravel to the Whitworth Gallery in Manchester, FACT in Liverpool, Wolds Village in the Yorkshire Wolds near Driffield, Swiss Cottage Library in Camden, A clubnight at ARTCH in Bethnal Green (with very special DJ sets to be confirmed), Flatpack Festival in Birmingham at the MAC space, King Edward VI College in Nuneaton,  and Sights from the Other City Festival in Salford.
Plenty more dates to book us in - please contact us at unravelfilm@gmail.com
Posted by Unravel -The longest hand painted film in Britain at 06:58 No comments:

Despite some serious travel issues we eventually made it to the presentation/launch of the Royal College of Art's Deutsch Bank Award for 2011.
Hard for us to believe that the slight creative sparks for the project began a year ago to the day. Great to be there and see how far this award has literally taken us so far.
Good luck and best wishes to everyone who chooses to go for it - we couldn't recommend it more! 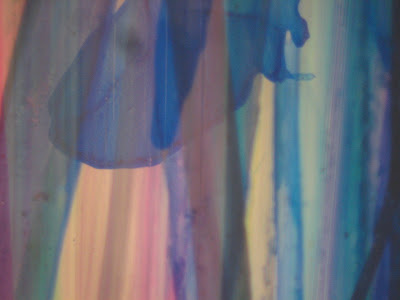 Posted by Unravel -The longest hand painted film in Britain at 06:42 No comments:

An exhausting but brilliant day with one hundred and eighty 8-11 year olds in six seperate workshops at Pendragon Primary School in Cambridgeshire. Hopefully we will have some photographs cleared by the school soon to show you soon.
This day also featured Maria's very first and Chris's re-introduction after nearly twenty years Primary School Dinner! 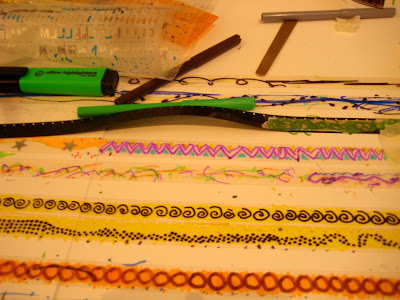 Posted by Unravel -The longest hand painted film in Britain at 06:36 No comments: 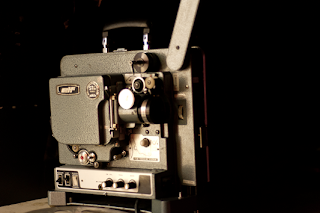 Our first night workshop with alcohol included(!) was with Video is the Only Constant at Corsica Studios in London. This is a great regular event presented by Christina Millare whereby film and video artists are able to screen their work - be they installations such as the ones brought by Manchester Artist Magnus Quaife or music videos such as Ian Pons Jewell and then subjected to a Q and A by the audience. We got loads out of being part of it and recommend it for anyone to submit their work to be part of or just to turn up and see excellent work by emerging artists.

The great pictures on this post were all taken by Giada Ghiringhelli  http://www.giadaghiringhelli.com/

Posted by Unravel -The longest hand painted film in Britain at 06:32 No comments:

Saturday 15th January at The Museum of Club Culture in Hull 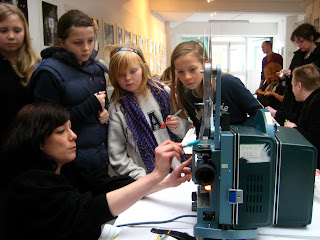 We were invited to come and run a workshop at the new Museum of Club Culture in Hull's vibrant regeneration of the Fruit Market by the Docks. This picturesque initaitive set up by artists Mark Wigan and Kerry Baldry proved the perfect setting, surrounded by a current photography exhibition of Northern Soul clubbers.  We were well attended and had a huge amount of publicity including being interviewed for BBC Radio Humberside and a great piece on us written after the workshop by the Hull Daily Mail. 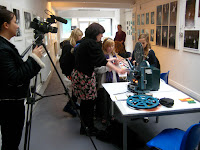 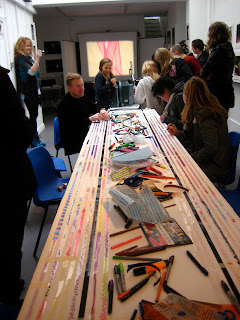 We were also visited by local performance artist Yol as shown in the post below.Thanks to everyone, it was a brilliant day.
Posted by Unravel -The longest hand painted film in Britain at 06:19 1 comment:

A busy week just been and gone for Unravel with workshops in Hull, Corsica Studios London, Pendragon Primary School Cambridgeshire (with six classes of 8-11 years olds!!!) and the Deutsche Bank launch for the 2011 Award at the Royal College of Art. As always, text and images to follow ASAP but be sure to check out this great review from our day at the Museum of Club Culture in Hull...
In the mean time watch this video of an impromptu performance made by Hull artist Yol half way through the day on saturday....!

Posted by Unravel -The longest hand painted film in Britain at 07:07 No comments:

Saturday 15th January will see us visit the Museum of Club Culture in Hull curated by artists Kerry Baldry and Mark Wigan where we've already been given a nice write up by digyorkshire.com here.
Followed by our visit to Corsica Studios with Video is the Only Constant in London on Sunday 16th. 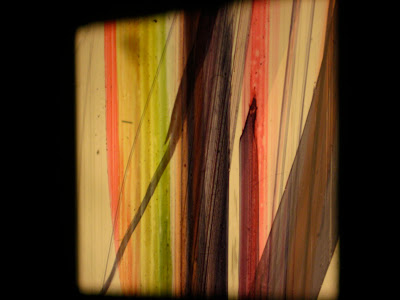 Looking forward to seeing some of you there!
Posted by Unravel -The longest hand painted film in Britain at 10:01 1 comment: 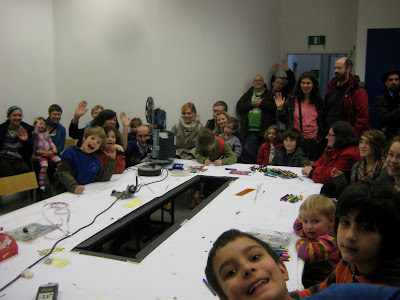 Such an amazing start to the new year was had with our day at the IKON Gallery on saturday 8th January. Run by Mark, Jo and Chris we were looked after all day by Emma Bowen the IKON's excellent Learning Coordinator. We ran a three hour session which worked really well with a steady crowd building up to a crammed audience for the final ten minute film produced that day which was predictably great and also accompanied by the loudest shout-out we have recorded yet! 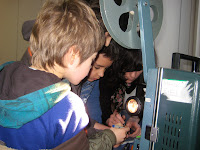 It was a an absolute joy to be at the IKON whilst they were exhibiting the first full retrospective of Len Lye in the UK - something hard to imagine hasn't happened before. 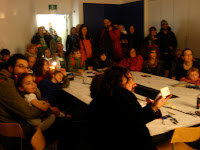 All of us involved in Unravel are huge fans of Lye's work and would never deny that the project owes all of its processes to those developed amongst others such as Norman Mclaren and Stan Brakhage particularly from the former two artists portfolio developed for the GPO Film Unit in the 1930's and '40's, but nevertheless we were all blown away by what we saw. 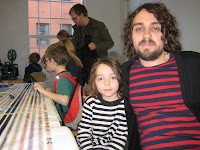 Full screen projections of key works incuding A Colour Box, Rainbow Dance and the awe-inspiring and deceptively simple Free Radicals (anyone who has taken part in one of our workshops will understand just how complex the scratch technique he employed to make animated lines seemingly rotate in 3-D before you) which took him three years to make and we think blows away milliondollarbudget fare such as Avatar, Clash of theTitans or Bono the movie (!) in 3-D every time. Even more impressive was the showcase of his Kinetic scupltures which we all found incredibly moving (and that really wasn't intended as a pun!). These sculptures are engineered to make the light and sound dance around you as you stand immersed in the experience. Gathering rave reviews this is well worth the travel costs to Birmingham alone  - miss this show to your own loss - it runs until the 13th February.  Thanks so much to IKON and everyone who made this our best date of 2011 so far ;)

UPDATE! - Just been sent this from Emma at IKON - a telecine made quickly on the day of the results of the workshop. Cheers again Emma!
Posted by Unravel -The longest hand painted film in Britain at 13:07 2 comments:

First up for 2011 is our date on the 8th of January at the IKON Gallery in Birmingham. We are really excited to be doing this is tandem with a huge retrospective on Len Lye - one of the pioneers of direct film and huge inspirations for our project. We will be running the workshop at the main brindleyplace site from noon until 3pm with a screening at 3pm. We are so excited to be starting the new year with such a prestigious gallery and perfectly synchronised exhibitions of one of our heroes. See you there!

Posted by Unravel -The longest hand painted film in Britain at 05:16 No comments: