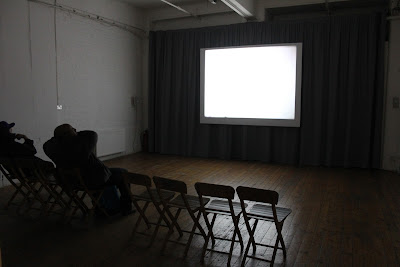 We were absolutely thrilled to be part of the Open Research strand at the Chisenhale Gallery in East London to showcase edited highlights of the work in progress final film over two days on Saturday 19th and Sunday 20th November in a designated installation space. We were delighted to have such a big crowd come and stay with the film for long durations, to listen to the perspectives and opinions on each of the locations of our workshops embedded into the final film that maps our metaphorical journey through collective memory and identity.

Saturday's screening was complimented by screenings of William Wegman's 'Around the Park' and the controversial 'White Dog' by Sam Fuller in an event curated by Chisenhale artist-in-residence to Victoria Park, Matthew Noel-Tod, where viewers were also invited to bring their dogs into the gallery to watch the films!

Thanks go out to everyone at the Chisenhale, especially Laura Wilson, recent winner of The Marsh Award in Gallery Education, for making this such a special weekend. 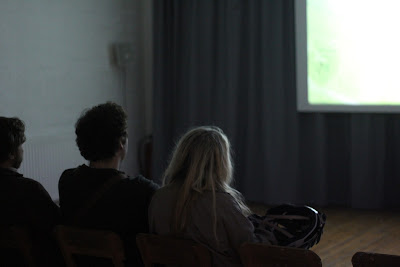 Posted by Unravel -The longest hand painted film in Britain at 06:40 No comments:

Great documentary made about Unravel

Rat Commander made this excellent ten minute documentary about Unravel for www.delete-tv.com featuring Maria and images from nearly every workshop so far. Enjoy!... 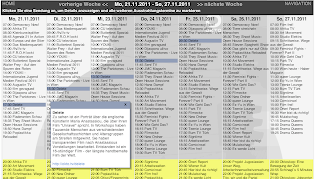 The documentary was also broadcast live through streaming on the Austrian channel www.okto.tv .
Posted by Unravel -The longest hand painted film in Britain at 06:25 No comments: 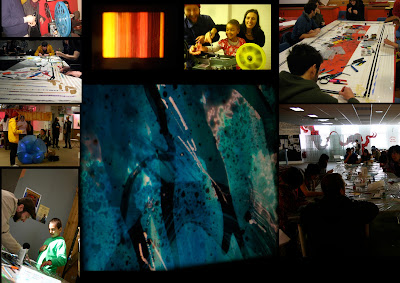 We are thrilled to be able to invite you all to a special weekend this saturday and sunday at the Chisenhale Gallery in East London to screen some of the edited interviews and films from our workshops so far. Come at any time between 13.00 and 18.00 to find out what some of our participants have offered in their perspectives on the places they have live whilst enjoying the filmic results generated at their respective workshops.

The Chisenhale is located in Mile End, East London near Victoria Park - a map of the location can be found by following the link below:
http://www.chisenhale.org.uk/visit.php

"In December 2010, Chisenhale Gallery hosted one of the seventy five national workshops entitled Unravel – the longest hand painted film in Britain, where participants were invited to paint, scratch and directly manipulate 16mm film.
Harking back to the direct animation techniques of Len Lye, Norman McLaren and Stan Brakhage these marked traces of multiple authors represent diverse demographics of the British people wherein each frame of the film represents one metre in the 874 mile distance between Land’s End and Jon O’Groats. Sound recordings, interviews and perspectives on each location have been collected and compiled– mapping a metaphorical journey through collective memory and identity. The collaged autobiographical oral accounts which speak of individual experience in different locations, times and spaces offer a non-linear, psycho-geographical exploration of the country made for and by the people of Britain."
Posted by Unravel -The longest hand painted film in Britain at 15:43 No comments: 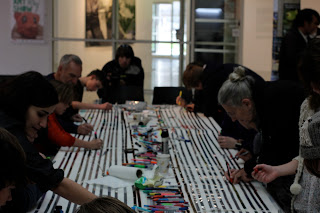 Maria and Chris ran a workshop at Peninsula Arts in Plymouth on Saturday the 5th November. We'd been looking forward to this event for some time as, our host, the artist, Kayla Parker had originally contacted us after our workshop for Brighton Cine City in December 2010 where a special showcase of her work was screened. Kayla's work is also part of the One Minute volume five touring programme organised by The Museum of Club Culture's Kerry Baldry so, although we hadn't met Kayla in person until this weekend we already felt very much like we knew her. Kayla and Peninsula Arts' David McErlane were great hosts and had done a great deal of publicity in attracting the wide range of Plymothians who joined us for our workshop and presentation about the project just after the screening of another direct film that Kayla had made with a group of local schoolchildren. It was great to share some of our edited work and the film generated during the day was excellent, whilst all of our participants were a very warm and welcoming bunch. 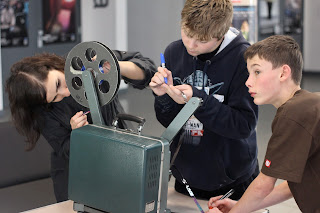 Peninsula Arts is a great space and currently one of the hosting venues for the British Art Show that is shared through several arts venues around the city. Neither of us had been to Plymouth before and were stunned by the preserved Hoe and Barbican areas that definitely made the six hour train journeys there and back from Manchester and London worth while! It was also great to see Chris Bartholomew who Chris had worked with in the Netherlands come and and check out the project. Thanks again to Kayla, David and our volunteers from Plymouth University's Media Arts Department for all their help - hope to see you again Plymouth! 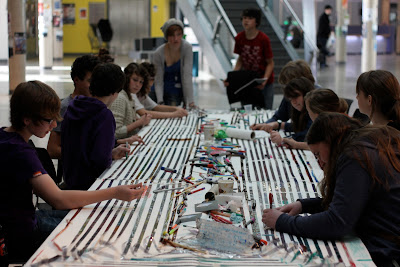 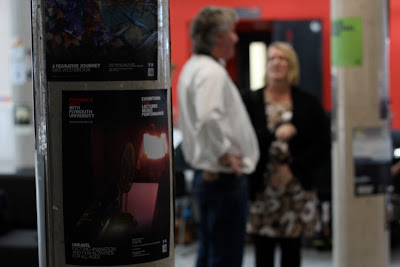 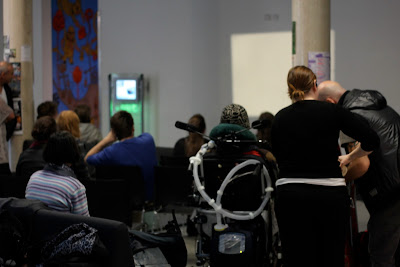 Posted by Unravel -The longest hand painted film in Britain at 16:30 No comments: 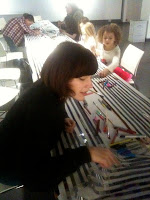 We showcased some of the edited work so far at the  National Media Museum in Bradford for the entire duration of the respected Bradford Animation Festival on the seventh floor exhibition space as a special installation from Wednesday 8th to Saturday 12th November including some of the work generated in Leeds and Bradford last year. 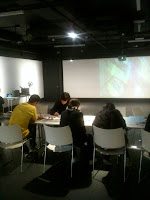 Chris also ran a workshop with special Unravel guest member, Leeds based artist and events promoter, Ali Clark, on Saturday 12th November with a extra special screening in the Cubby Broccoli Cinema and a presentation about the project and just how far it has taken us. We even had yet another return visit from two members of the Davies family - who must now be our most regular attendees (and hosts) to Unravel events. 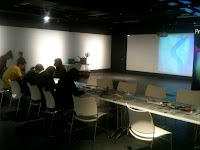 We were thrilled to be able to return to the museum - a venue where Chris spent many childhood visits - it was again an honour and a privelige to be there so thanks again to everyone who could make it down.
Thanks go out to Amanda Chinneck and Deb Singleton as well as the rest of the National Media Meuseum and BAF teams.
Posted by Unravel -The longest hand painted film in Britain at 16:14 No comments: