Jo and Maria were on the road again in June, to hold a workshop at the inaugural Dunoon Film Festival. After two trains and one ferry (and a big splash of sea-waves for Maria) they spend two fantastic days in Dunoon, a beautiful sea-side town with a rich history as a coastal resort for holidaying Glaswegians coming down the River Clyde.

The workshop took place on Saturday the 15th of June, at Burgh Hall, a beautiful building undergoing much needed rennovation thanks to a passionate and determined local initiative: http://burghhalldunoon.com.
We recorded interviews with some of the engineers, architects and community activists involved in the restoration; it will all be included in the final soundtrack. 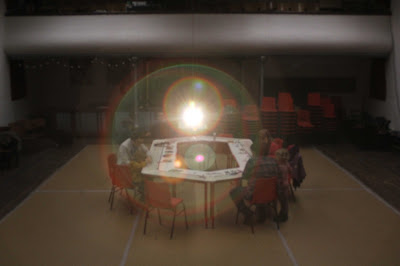 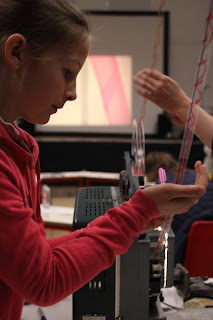 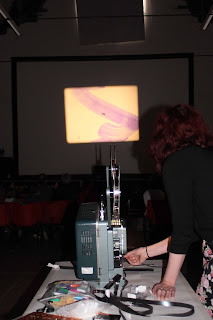 The Unravel workshop was sponsored by Dunoon Community Radio, and DJ Sam invited Jo and Maria to the studio for an interview and some tunes: http://www.dunooncommunityradio.org/2013/06/15/dcr-sponsored-unravel-direct-filmmaking-workshop/ 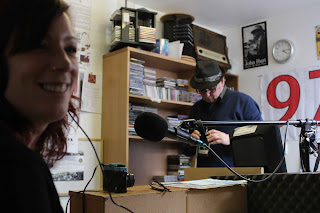 It was a real pleasure to have been part of this festival. A big thanks to Matt Lloyd Co-curator and Producer of the Festival and Kirtsin Innes PR.
http://www.dunoonfilmfestival.org/about 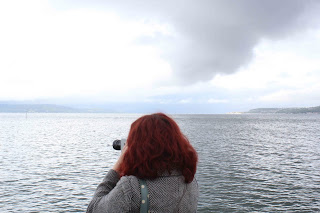 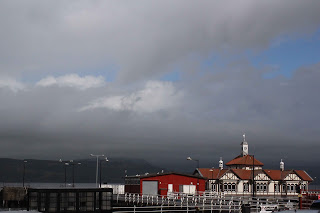 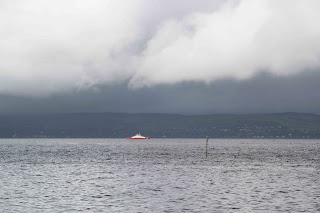 Posted by Unravel -The longest hand painted film in Britain at 08:12 No comments:

Looking forward to being part of the excellent Kazimier's Garden Project  on Sunday 14th July - although we wish we there the same weekend as their upcoming date with the incredible Shangaan Electro who run a workshop there on the 20th July ;):

Posted by Unravel -The longest hand painted film in Britain at 06:46 No comments:

A plea from Chris:
We've visited and run workshops at the National Media Musem twice with Unravel, they've installed our work as a work in progress too, not to mention the inspiration and support they have offered countless generations and families visiting Bradford to spark interests in the moving image.
Personally, I visited the museum multiple times as a child, and it undoubtedly left its mark on myself - as I know it did on many of the artists and film makers who were able to visit such an amazing and innovative museum outside of London.
It would be a total loss to the country if this museum was allowed to close due to cuts by the Government and the Science Museum in London. Please, please sign!
Thank you. http://you.38degrees.org.uk/petitions/save-the-national-media-museum-bradford

UPDATE - Thanks to everyone who signed the petition, the news is that the museum has been saved at least for now - http://www.bbc.co.uk/news/uk-england-leeds-22942702
Why not show your support for the museum by attending this summer!
Chris x
Posted by Unravel -The longest hand painted film in Britain at 16:29 No comments: 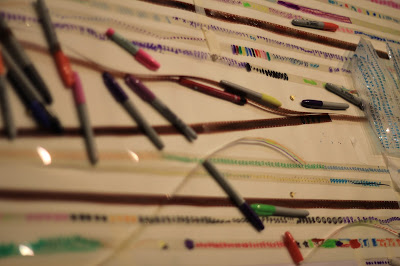 Looooooong time since an update but we had some awesome workshops at Flatpack Festival and The Royal Standard with some photo evidence to prove it soon.
But this post is dedicated to the workshop we will be running at the inaugral Dunoon Film Festival which looks to be a wonderful and beautiful place. Maria and Jo will be running the workshop which takes place on Saturday at Burgh Hall from 11:00-14:00 and as always, free, and open to all.

Posted by Unravel -The longest hand painted film in Britain at 16:15 No comments:

On the first of March, Chris re-joined the team at Turner Contemporary, and together with artist Matt Rowe, and Make Do and Draw, made collaborative work with local sixth formers in response to the three gallery shows currently in the gallery spaces - Rosa Barba, Carl Andre and J.M.W.Turner .

This is the video of the results that were all made within the day's workshops:
Posted by Unravel -The longest hand painted film in Britain at 12:25 No comments: 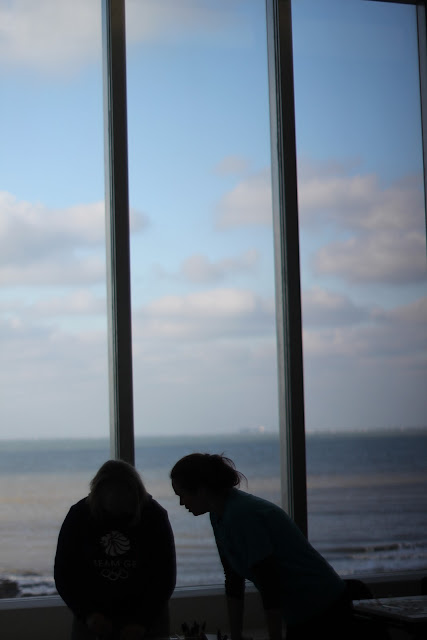 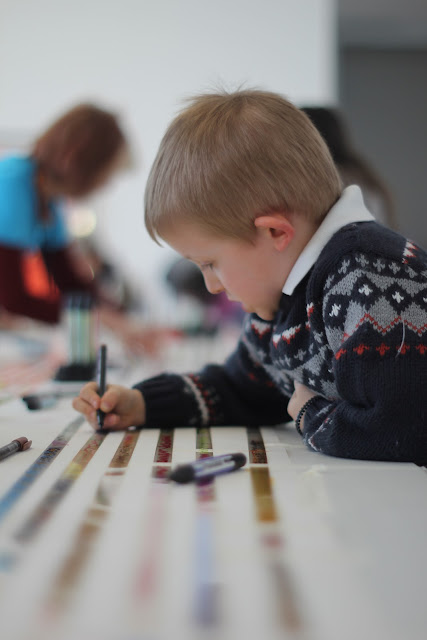 Freshly back from Nairobi, Chris ran two half-term family focussed workshops at the Turner Contemporary in Margate on Wednesday 20th and Thursday 21st March.
The Turner Contemporary opened in April 2011 and has been celebrated as a great success, attracting cultural regeneration to this traditional English seaside town. Each day attracted over 115 participants, some of whom returned for the second day which created a record length of film during the three hour session - creating more than 25 minutes worth of abstract hand drawn animation!
Chris also delivered a swift visit and lecture in Canterbury at the University of the Creative Arts speaking to 1st year Fine Art students about Unravel, his artistic practice including his residency in Kenya. The workshop was also related to the work in the gallery spaces by Rosa Barba who's kinetic scuptures with 16mm film projectors were incredibly relevant to the Unravel workshops and participants - even utilising the same Elf Eiki projector. Chris's role during the film shoot of the co-comisssion in Manchester included blowing the dust that can be seen shining through a hole in the wall within the 35mm film installation on view in the main gallery space.
Thanks Margate - see you again on the 1st March for the sixth form master -class... 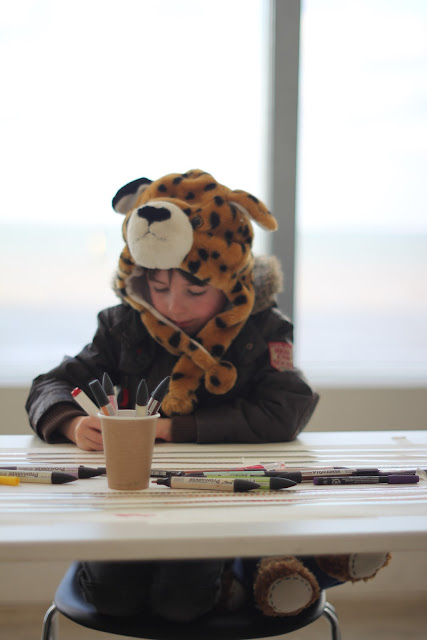 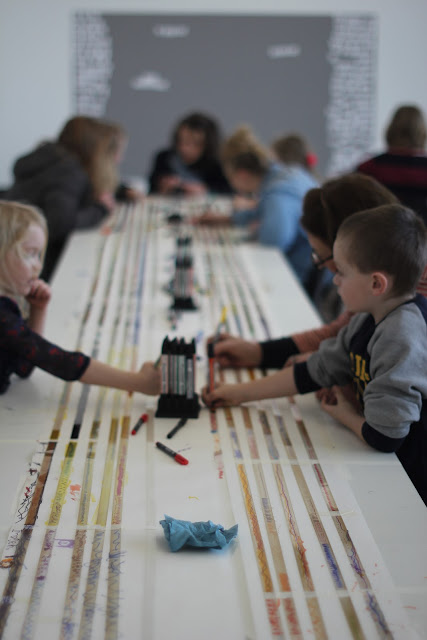 Posted by Unravel -The longest hand painted film in Britain at 07:47 No comments: 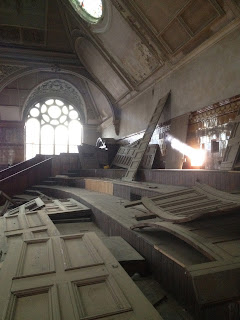 There are three upcoming events at the Turner Contemporary Gallery in Margate where Chris will represent Unravel and run direct film workshops in response to the current exhibition by Rosa Barba - Subject to Constant Change.
Chris was also involved in the Cornerhouse's co-production of the 35mm film shoot for the exhibition which runs simultaeneously in Manchester and Margate (see bad picture from iPhone to the right to prove it).
The events are 20th and 21st February and also a sixth form master class on 1st March.
Chris is looking forward to standing out in Margate with his tan he has acquired during the last five weeks on a residency project in Nairobi, Kenya but not looking forward to the imminent cold he will inevitably catch on return to the UK and thirty degree drop in heat!
Posted by Unravel -The longest hand painted film in Britain at 07:06 No comments:

Round up of recent/current events

Apologies for the long delay in updating the blog we've been very busy....
Chris is currently finishing off a five week residency in Nairobi, Kenya courtesy of the Gasworks Gallery and Triangle Network International Fellowship Programme. You can keep up to date with his experiences by following his blog: www.chrispauldaniels.blogspot.com or fly over  especially to Nairobi for this event (it's free if that tempts you) on friday... 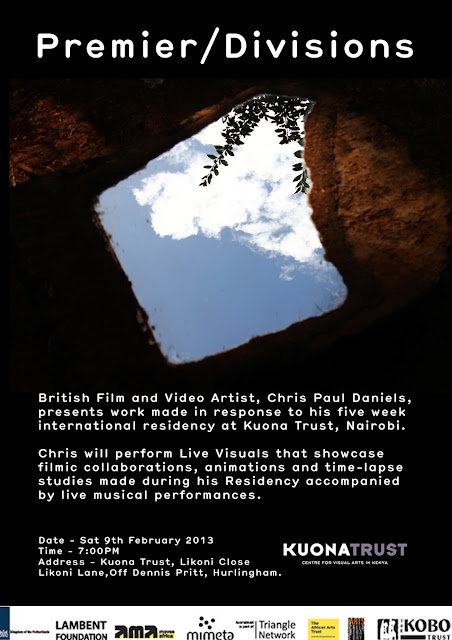 Kelvin's exhibition at the Hockney Gallery at the Royal College of Art opens on Monday and is on view for one week.

Also some big big (secret?) news for Mark and Jo, we're not going to say what but we're incredibly happy and excited for you both!

Posted by Unravel -The longest hand painted film in Britain at 07:00 No comments: